A Legacy to Build On

The Gatton College Graham Office of Career Management is named in memory of 2nd Lt. Jeffrey C. Graham who died of injuries sustained from both an improvised explosive device (IED) and small-arms fire during Operation Iraqi Freedom in 2004. He was leading a group of 18 soldiers, an Iraqi translator and an Iraqi policeman when he spotted the IED taped to a guardrail. Upon spotting the IED he put up his hand to stop the others who were walking in single file behind him. As he did, the bomb detonated, killing Graham and three others. His warning saved numerous lives and Army officials consider Graham a hero. 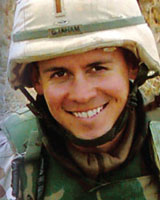 A 2003 graduate of the University of Kentucky, Graham looked forward to using the skills he learned at UK to help the people of Iraq. One night while talking with his father he said, “Dad, we are making a difference here and when things calm down I am looking forward to using my engineering education to help these people rebuild their country.”

It is upon the spirit of Jeffrey Graham that we wish to build the Gatton College Graham Office of Career Management. Through hard work and successful employment, our students are equipped with a world-ready education enabling them to change the world through their careers. Read more about 2nd Lt. Jeffrey C. Graham.